The Elf To Be Named: Arrival

Last year, Santa brought baby B a wonderful scout elf and book for Christmas.  This year, I know the elf was anxious to make his December debute.  While he still doesn't have a name, he greeted us on December first in the very best of style for a big arrival breakfast. 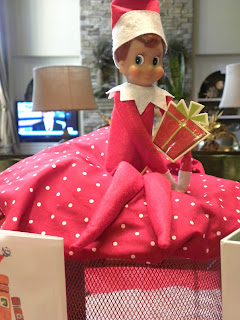 Our elf breakfast consisted of festive food and a fun (easy) tablescape that was whipped together when the sun came up.  Baby B awoke early and breakfast was served promptly prior to 8am.  This gives new meaning to up with the sun when there is a tablescape involved.
The commemorative book, a red toy bin flipped upside down (Targer $1) and some polka dot fabric ﻿(from the babe's party this summer) served as the perfect centerpiece.  Red and white fabrics layered with snow (aka upholstry pad / filler) and a small chalkboard welcoming elfie rounded out the easy display. 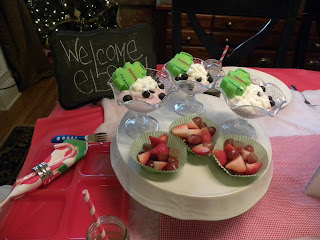 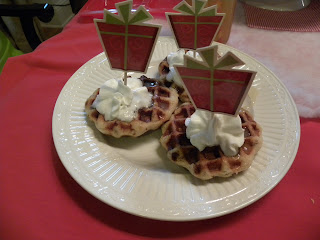 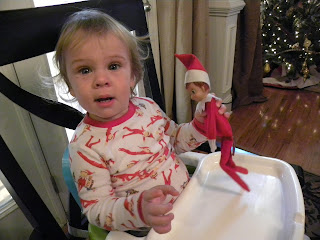 Decked out in his elf p.j.'s we violated Elf Rule 101 by letting B hold elfie.  It felt necessary and I'm sure Santa would approve :).  Dear Hubs read the book (yes, when he thought there was a picture involved ... this is what I get). 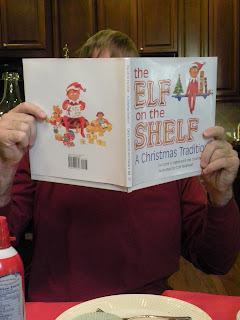 It was a fun way to kick off December and our elf tradition as a family.  An early poll had the three names as front runners for elfie:  Clark Grizwold (suggested by moi), Jobs (as in Steve Jobs - compliments of Dear Hubs) and Dadden suggested by Baby B.  Thus far, every toy has been named Dadden, so why would this be different? 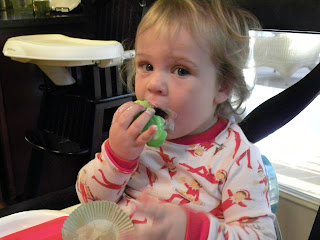