Celebrating Two Months with Back Flips! 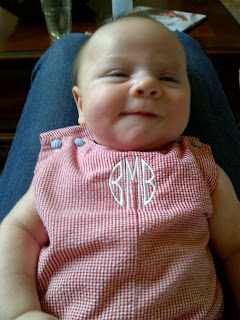 While I typically save these sorts of baby diary moments for our family blog (if you are a friend and would like access - just email me!), the proud mama in me couldn't help but be elated to share with everyone!  I can hardly believe it, but Baby B is two months old today.  It's official ... time is flying by us!  In some regards, it seems like a lifetime that he has been here and I can't hardly imagine what I did before spending my days and nights with him.  But, on the other hand, things are moving so fast that it seems like I will blink and be sending him off to college!

The past few weeks have been full of giggles and smiles (him and us!) as his little personality is starting to take shape. The highlight of the month came with only minutes to spare before his official 7:45 am birthday when he figured out how to flip over in his crib from his tummy to his back.


Baby B loves sleeping on his tummy and we let him do so for supervised naps most days. I have noticed that over the last week or so that he has become much more alert when in this position. He assumes a very rigid plank posture like a baby yogi and can lift his legs and his head off the ground at the same time. Now, he has figured out how to combine this pose with the comforting little "frog" pose where his legs are tucked up tight under him.  I'm telling you, it's the cutest thing ever when he tucks those little legs up!  And so, the obvious next step ... he tries as hard as his little might lets him to push those little legs up hard enough to flip over.  Most of the time, after about five minutes of such strenuous activity, the little guy gives up and admits defeat; but not this morning!

After his "breakfast" bottle around 7am, it was obvious he wanted a little more naptime and so I placed him on his tummy in his crib. From the video monitor in our room, I caught the perfect glimpse of Baby B executing the perfect gymnastic flip as he rolled over to his back. I'm not sure which of us was most surprised - him or me!

Dear Hubs was asleep for all these crazy antics ... well, he was asleep until I smacked his arm and proclaimed "he flipped!". The response was something a little more groggy but nonetheless proud. I watched a few more minutes as Baby B tried to flop back to his tummy, but after no success and a few loud cries - I went in to rescue him and put him back on his tummy to sleep.

And so begins our new month with the babe! Given this morning's gymnastics, I'm sure it will be an active one!
Posted by On Being Bianca ... at 9:51 AM