Baby B is mobile.  It's a fact.  At six and a half months, the boy started with a slow crawl.  Now, a month later ... he's a full on sprinter on his knees!  Of course, equipped with NO fear and a house that is (in my opinion) well decorated, he goes straight for the danger zones.  First stop ... the stacked stone fire place.  He seems to camp out right by it.  His precious little face just inches away from stone.  I shudder thinking he might whack, flop or konk his head on the hearth.

Have no fear, Dear Hubs came up with a solution to the rescue.  With as little as agreeing it was a good idea, Dear Hubs swooped into action and surprised me by creating a cover for the hearth that is stylish and perfectly safe. 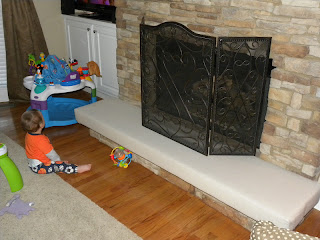 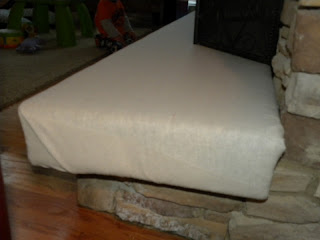 Since it wasn't my project, I don't (a) have pictures of the steps and (b) only have a rough idea of how he did his magic.

Cut 1x1's (or have the store do it) to meet your measurements for the sides and front.  Flat plywood board is used for the top.  Screw the 1x1 onto the plywood.  Cover the entire "box" with carpet padding foam and staple into place.  I chose a neutral linen muslin to cover the entire thing so it blends nicely with the stone and the decor.

Now, less to worry about when Baby B tries his daredevil stunts!  Thanks Dear Hubs!﻿
Posted by On Being Bianca ... at 9:24 AM