Straight off a 10 hour flight home from Barcelona (pics of this fab trip forthcoming), Dear Hubs and I headed back to our Alma Mater for the homecoming game; Georgia Tech versus the Cougars of BYU.  The game (and our team) left something to be desired, but we had a wonderful time catching up with a few faces from our college years, scooting over to check out the new football practice facility (which Dear Hubs was in awe of since the facilities weren't nearly so amazing when he played) and then headed to the game.  In tow all along the way was Baby B.  I can hardly believe it but this was his VERY FIRST GT game.  Last year he was too tiny and this year, we just have had too much going on to make it back to the games.  He enjoyed every bit of the tailgating scene and actually made it to half time of the game ... which was a shocking event all on its own!


I just love these pics of Dear Hubs with Baby B at the practice field.  One of these may find it's way to black and white for Dear Hubs' office! 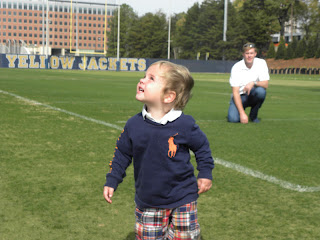 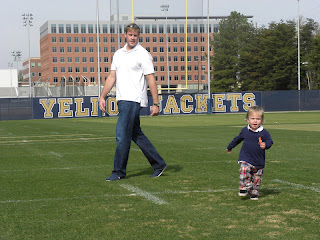 The game was a hit, well ... more specifically the small airplane that flew around the stadium with a large banner advertising free entry to the Cheetah (strip club) was a hit.  Men .... 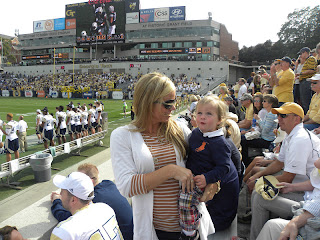 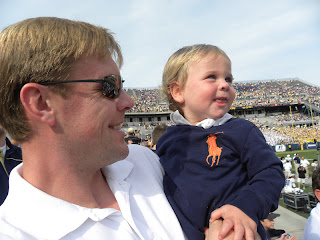 By half time, 2 sippy cups of water, about 85 graham crackers and a soft pretzel had been consumed.  That was our queue that it was time to head home before the impending melt down due to delayed nap ensued.  We stopped at the Varsity for a quick chili dog and rings on our way north.  I love that place! 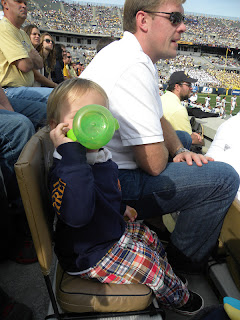 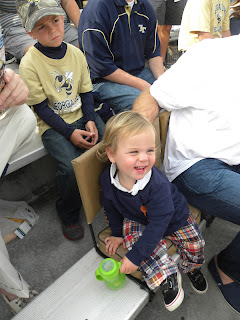 Given performance (of our crew not the team), we will certainly be making a repeat appearance for future games with the Yellow Jackets newest fan!
Posted by On Being Bianca ... at 10:06 AM