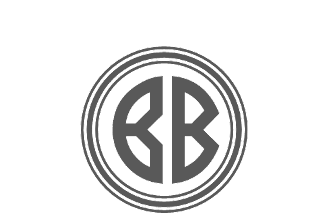 As promised on the first party post here, I thought I'd give y'all a good look at the sweet treats from Baby B's first fete.  The treats were so tasty and enjoyed by all.  Baby B thought his own smashcake was just tops!

While the Varsity truck fed hungry bellies around the corner on the drive, the sweets were displayed on a big table on the back deck. 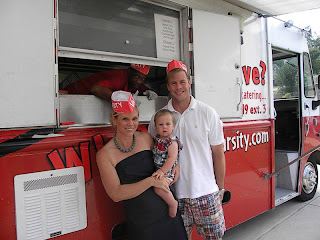 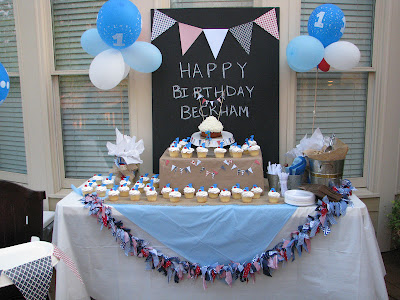 Here's a few of the tips and tricks of this sweets production:

Tablescape
The large chalkboard behind the table is a last minute crafty.  I have been on the hunt for a big ole' chalkboard for some time.  Trouble was, I didn't want to pay the hefty price for a big one that was decorative and I really don't have a need for yet another plain Jane chalkboard.  (as I've explained here ... I have a chalky addiction).   I found a very large scrap of press board in the basement that Dear Hubs had hid away (for who knows what purpose) and simply covered it with a few coats of my handy chalkboard paint.  Seriously ... do I use that stuff on everything?  Topped with some large paper pennants, it was the perfect backdrop for the sweets table.

Table clothes were loaded up in white, blue and topped with burlap.  Since it was outside and thunderous clouds were looming, I actually opted for disposable tableclothes and topped with a burlap runner.  The garland across the front is comprised of various red, white and tons of blue fabric scraps.  I LOVE this garland and have plans to make another one.  A box covered in craft paper served as the perfect tier for the back of the table to give dimension.  Tiny paper pennants that matched the invitation hang across the front of the box and the plate stand.

The balloon topiaries are in silver paint buckets that I had on hand.  You can find yours at a local Home Depot for just a few bucks.  These have served me well through the years! 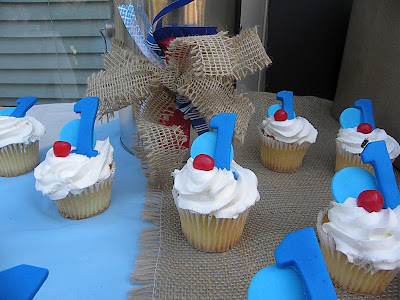 Since we had such a crowd to feed, I opted for cupcakes. I had originally envisioned a monster sweet sensation for Baby B's first fete, but when reality set in that it would be 100 degrees, melt and look like a hot mess ... well, cupcakes it is! To save my sanity, I actually outsourced the cupcake baking. (gasp, I know).  I always bake my own treats, but this time, with gentle coaxing from Zsa Zsa, Dear Hubs and every bestie known to man, I decided best to save my sanity! The cupcakes were topped by moi, partial credit right? I made large fondant ones and a polka dot in blue, then added a cute sour cherry candy.

They were super cute when all was done.

All that said, I couldn't bear the thought of Baby B's first cake being from someone other than me.  So, I DID bake that giant cute cupcake that Baby B would be smashing shortly after this pic below.  Using my oversized cupcake pan, I simply baked a yellow cake and topped with white icing using a wide Wilton tip.  I hung a pennant banner from two grilling skewers﻿.  It matched perfectly with the individual cakes and was a great focal addition.  Certainly, my critic was a fan! 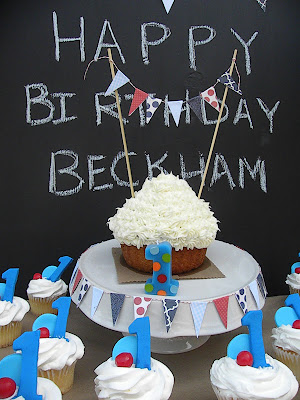 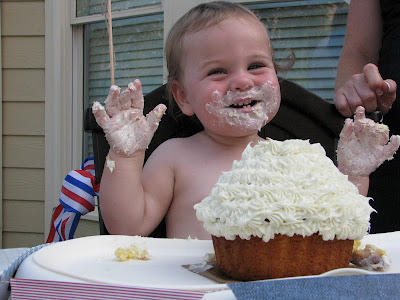 As if tummies weren't full enough, in addition to the sweets; we had yummy roasted peanuts and popcorn for snacks.  Dear Hubs helped out and rolled our large movie style popcorn machine around from our media and game room on the terrace level.  With the music cranked up and attendees firmly seated for the mainstay, these treats came in handy! 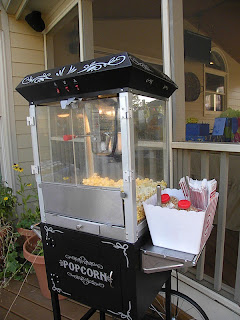 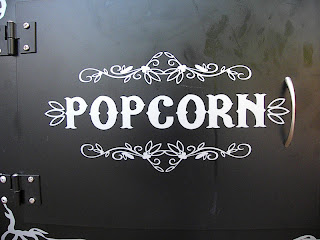 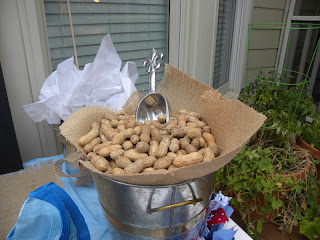 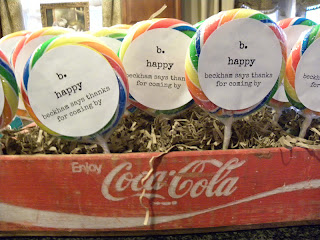 As the night went on, the kids negotiated opening their favors early.  Going along with our theme, I opted for oversized carnival style lollipops.  I found these cuties on Amazon (they were better in size, style and price than any other site I checked!).  Only trick, there was a large label on the pops already.  I used the same old school typewritter font as the invites, labels and all other notes to whip up some large labels for these favors.  To display, I filled a vintage Coca-Cola crate with floral foam, topped with paper shreds and presented the pops in this tray.  They were just darling! 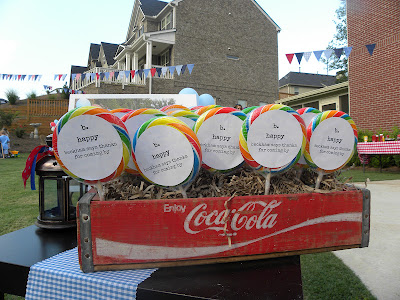 They were a hit with all! 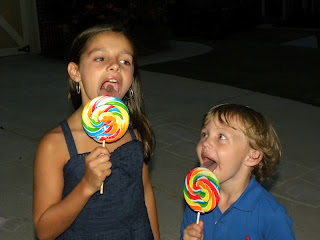 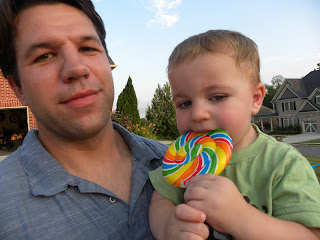 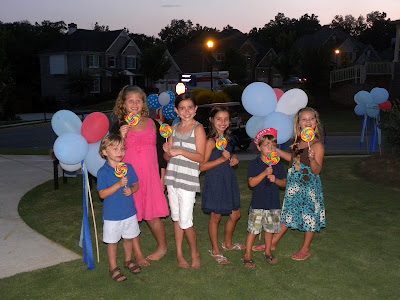